Sporting Wine Club first got to know Pep and Kiko of the Bodega Hiriart through one of our members, Jo Earlam.  We were well aware of a gap in our Spanish portfolio, despite the excellent Rioja supplied by Sir Nick Faldo, and this is a great addition. We are delighted to feature such a beautiful wine with a strong rugby connection and a Hiriart inspired own label which expresses the growing love of rugby by the Spanish Nation. Thanks Jo for the intro and Salud to all at Sporting Wine Club. Please sample a case and we guarantee you a wonderful experience.

Made from 100% Tempranillo, this Crianza is soft and smooth with delicate, ripe tannins. Intense aromas of dark cherry and plum are mirrored on the pallet and supported by subtle vanilla notes from maturation in French oak.  Full bodied with good acidity and a long finish, this wine is great with food and ideal for everyday drinking. 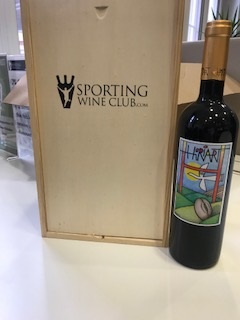 Bodega Hiriart is a new winery with history and experience, which combines traditional and new technology to ensure Quality, the objective of this family business!

The winery is built on top of the old, underground warehouse which dates back to 1750 when the ancestors of the family manually excavated the vaults which still remain. Today, tribute has been paid to the ancestors who were able to unite and convey the best of the wine culture of Castile and Bordeaux.

The relation between Alejandro and Hiriart started many years ago, when he was just a child. The friendship between the two families, Hiriart and Muñoz, meant Alejandro visited the winery several times during his childhood. During those visits, while his parents where sharing a glass of wine, he would wonder around the old winery and the aging room.  When he became a teenager, he got also more involved with the winery. He didn´t come to the winery just as a guest but as a worker, helping during the harvest campaign.

Nowadays he is concentrated in his university studies of medicine, something that he shares with his other passion, rugby.

Alejandro Muñoz started playing in VRAC, the rugby team of his city, as a child and everyone saw him as a boy with a great future. He has always belonged to that privileged group of players who “play well and make others play better”. They were not wrong. He completed two seasons in Ireland to improve his sport, learn English and finish an interesting academic education. He has a breathtaking tranquility and when on the field shows no nerves.

He made his debut in September 2016 with the first division team setting up an excellent match against the other team of the city, and main rival, El Salvador.

He was seen by the Spanish 7´s national team and soon joined them. Since then he has been focused in the international 7´s competition and doing a great job in different locations like London, Moscow, Las Vegas and Vancouver.