Six Nations – a (dis)passionate look back. 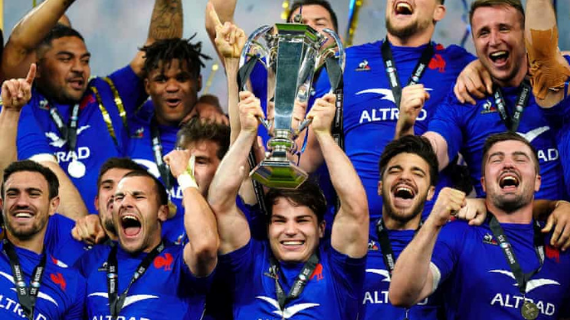 SIX NATIONS – A (DIS)PASSIONATE LOOK BACK.

Rugby romance, drama and crass stupidity at the close in Cardiff was a stunning feature of an ultimately predictable Six Nations as France and Ireland were streets ahead of the rest. I am not one for shouting at the television, and hardly when Wales is playing Italy. but as the Wales scrum half shaped up to kick I implored him not to! Funnily enough he did not hear me and gave Italy one last chance with an aimless punt. The glamorously named Ange Capuozzo countered for one of the tries of the tournament and the kind of redemption everyone wanted to see and to end a 36 match losing streak.

What Italy needs now is a real plan to build on this and for genuine leadership from their new President who must usher in a new era. Kieran Crowley is having an impact and the players clearly believe in him. As for Wales, the great Jonathan Davies had speculated that the National team needed to start losing to create change. The regions are their lifeblood and instead are haemorrhaging unnecessarily. The new Chairman of their Professional Game Board is my old mate Malcolm Wall and together with the very progressive managements of the four regions they must orchestrate change as soon as possible. I think they will.

I do not subscribe to the view that Scotland has gone backwards. They played some of the most scintillating rugby and the statistics show it. They are very good to watch. On two occasions they would have been on an even keel with both Ireland and France but blew the chances. They must narrow that margin of error with more precise passing under pressure- the loss to Wales was an aberration frankly although I admired the massive effort by the men in red.

A Grand Slam for Ireland was a credible outcome, but for a slow start in Paris which cost them momentum and ultimately the tightest of matches. While not a special fan of Andy Farrell as Englands backs coach a number of years ago, he has done a superlative job here and let his team do the talking on the pitch, unlike some others. I sense growth in the squad, and while they were passionately desperate to win the Six Nations, the World Cup is unfinished business for all Irish rugby and I mark them as a semifinalist at least.

Coming second to France was no Irish failure. As I said, you can wrap a cloak around them both, with some distance between them and the others. Having toured around France for six years as Chairman of EPCR visiting their clubs, I could tell this was coming for the French. Allied to a quite brilliantly constructed coaching team, the loyalty of selection to the U20 stars of a few years ago has paid off and the pace at which they play made them irresistible at times against England. Any squad who feels that loyalty and respect and trust will deliver back in multiples. They have also made a great connection with the crowd at Stade de France (see the Viking thunderclap?!) and the whole nation has embraced them – so important to their psyche. Grand Chapeau to Les Bleus as they say and roll on 2023 when they will be among the favourites for the World Cup. The Springboks may have other views.

What of England, unmentioned so far. The outpouring of vitriol has been incessant since the weekend but only because of a perceived lack of honesty. The English Rugby public is very knowledgeable and in a world of misinformation feels disrespected and it seems that honest appraisal is at a premium. I have some views to share but they deserve a few lines of their own. Watch that space!

Highs and Lows of a Rugby Summer

All Blacks in an Irish stew as Super Saturday approaches