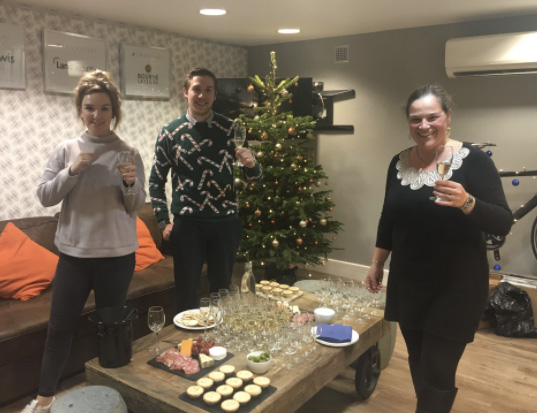 It was an inspiring evening and we met a whole load of exciting new brands. Schalk’s Mon Rene kicked off the evening and our Christmas Offers went down a treat! Beefy Botham and Bob Willis’ wines especially took everyone’s fancy as did Sir Gareth Edwards’ That Try – the perfect Christmas gift!

Following England’s impressive clean sweep in the Autumn Internationals, we moved on to Chris Robshaw’s Testimonial Dinner at Billingsgate, Central London. More than 1000 people packed into the room to pay tribute to his strong performances entirely appropriate then, to have two of Schalk Burger’s strongest offerings available to the premium tables. Namely the Welbedacht Hat Trick and the Welbedacht Chenin Blanc.

It is clear that Schalk’s wines are becoming known and loved amongst Britain’s rugby community.

Friday 2nd December saw the legendary Drew Bledsoe announce his partnership with us in Boston, USA at the British American Business Council of New England’s 30th Annual Christmas Luncheon. Drew and his wife Maura presented their Doubleback wine at the wine tasting whilst announcing their excitement at having their wines in the UK for this first time.

There are four NFL matches to be scheduled in London in 2017 so there is all to play for with Drew’s top of the range wines which have just arrived in the UK: https://sportingwineclub.com/winemaker/doubleback/

SWC Team had a superb evening serving Sumaridge Sauvignon Blanc and Syrah at the East Anglia’s Children’s Hospices charity fundraiser with Ambassador, Ed Sheeran, giving his only UK performance this year! Set in the Natural History Museum and surrounding the iconic dinosaur skeleton, we were wowed by the incredible help EACH provides for children and families of those who so dearly need it.

The Sumaridge Sauvignon Blanc and Syrah was a hit, so much so, that when it came to the auction lot of a stay for 10 people on the Sumaridge Estate vineyard in Hermanus, a wild bidding war commenced. Eventually 2 lots were sold for a total of £39K! An outstanding result for the charity and simply fantastic news for Simon and Holly Bellingham-Turner who generously donated it to EACH.

We had the privilege of being part of Handford Wines Christmas tasting at Vincent Square. On show were three of Schalk Burger’s best sporting reds, the Bohemian Syrah, Welbedacht Cricket Pitch and Welbedacht Hat Trick. 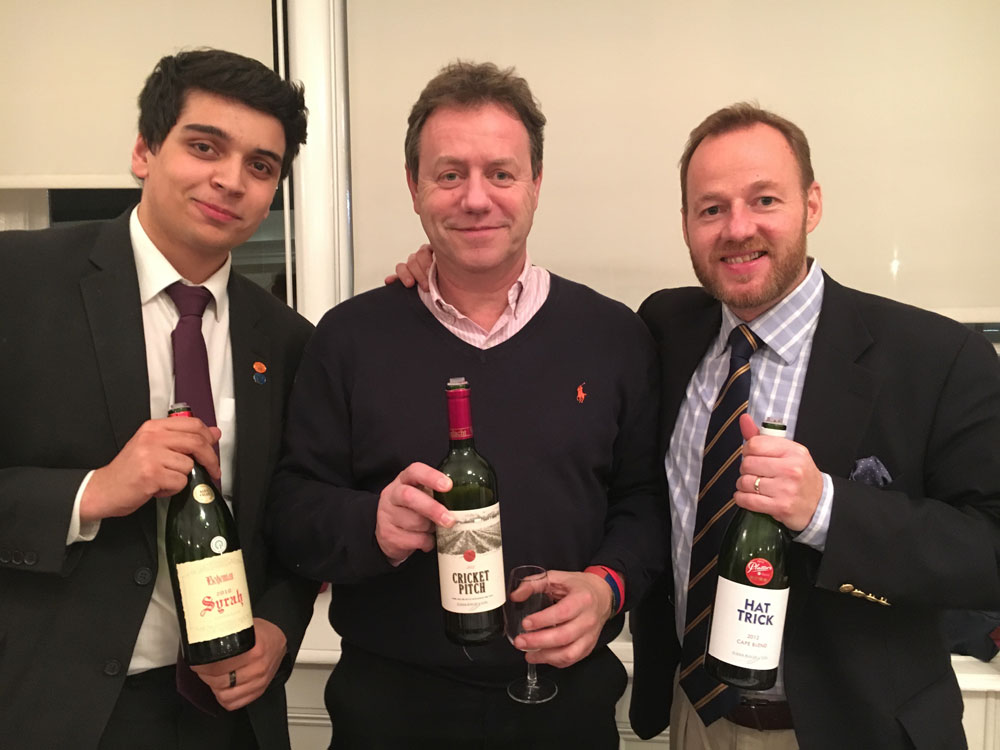 Given the overall quality of the Handford Wine portfolio, we were delighted by not surprised to hear so many people complimenting Schalk’s wines. Greg Sherwood, Master of Wines, was on hand to lend his expertise. All in all, the Bohemian Syrah carried off most of the plaudits and we now eagerly await the next shipment from Schalk!

Thursday evening proved to be another successful wine tasting with EP. This time we partnered up with the Dry Martini Bar to give our sportsmen, women and wine connoisseurs an exciting experience starting the evening off with a delicious cocktail containing our Collalbrigo Prosecco.

We showcased our Collalbrigo collection from Italy produced by sporting winemaker Francesco Cosulich (ex-Italian professional Rugby player), along with our Sumaridge wines from South Africa. Simon Turner, owner of the Sumaridge Estate joined us, giving us a very entertaining and detailed tasting on his spectacular portfolio. 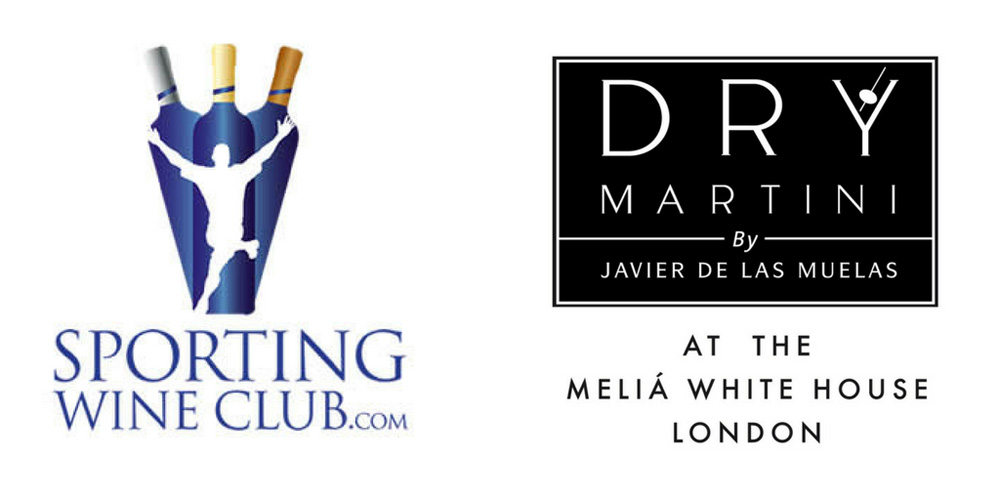 The Walpole British Luxury Awards celebrated and rewarded brands and individuals for their outstanding work in the luxury sector both in Britain and abroad in the splendid setting of The Dorchester, London. The ceremony honoured those individuals and companies who have, in the views of our illustrious panel of judges, members and industry experts, achieved the pinnacle of excellence across ten categories in the past year.

It was a truly special evening, making us all proud of the incredible achievements to come out of Britain. The luxurious Sumaridge Maritimus and Epitome greatly complimented the Dorchester’s exquisite menu and were enjoyed by all.

Sporting Wine Club were honoured to supply the wine for the World Rugby Awards 2016, held on Sunday 13th November at the Hilton London Metropole.

Schalk Burger’s Hat Trick and Chenin Blanc wines were the perfect complement to a star studded evening celebrating a stellar year for rugby (how is it already a year since the 2015 World cup?!)

Beauden Barrett was the recipient of the evening’s main award, won by Schalk’s own son, Schalk Jr, in 2014. The All Blacks were also honoured for their phenomenal year, as was Maro Itoje, who picked up the Breakthrough Player of the Year. 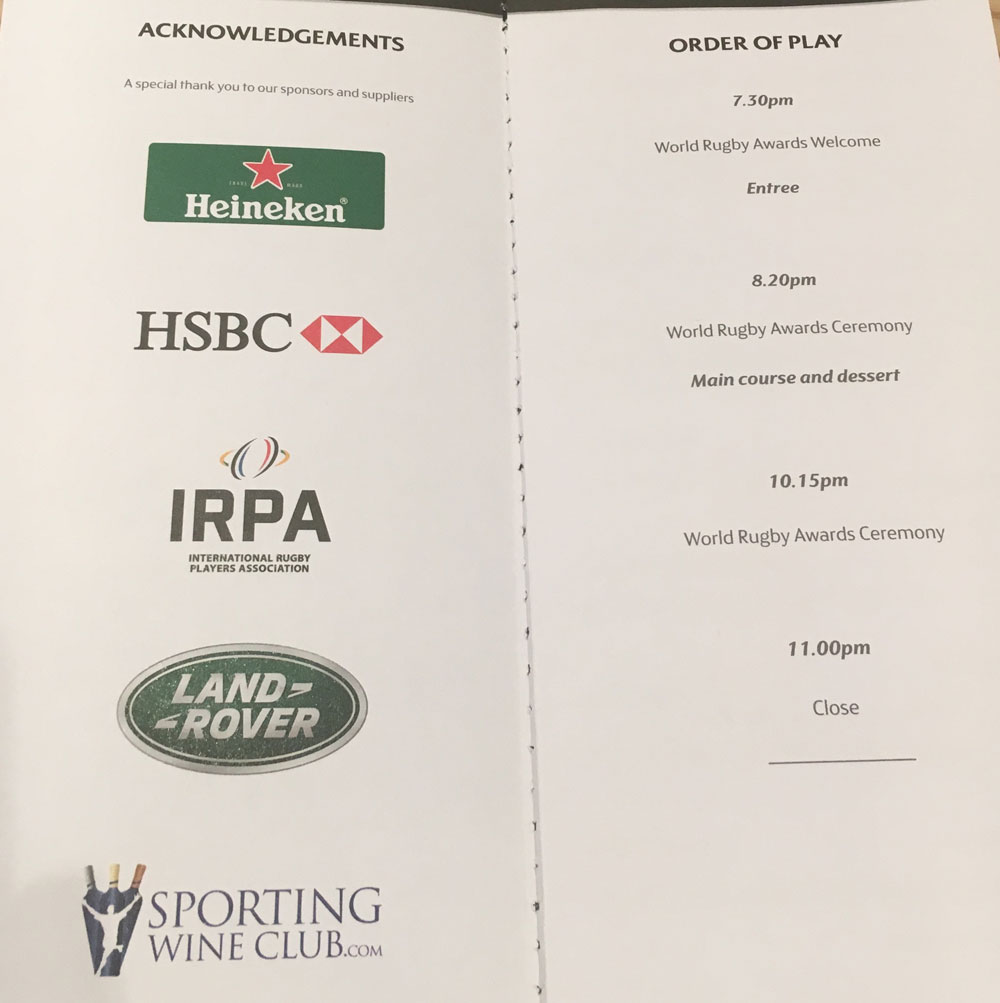 The SWC team had a wonderful evening celebrating all that’s good about the sport – and spreading the word about Schalk’s wines in the process! Thanks to all at World Rugby for their support.

Check out Master of Wine Greg Sherwood’s blog of the evening: Rugby and Wine – Attending the World Rugby Awards 2016: https://gregsherwoodmw.com/2016/11/14/rugby-and-wine-attending-the-world-rugby-awards-2016/

It was my first weekend of European rugby and Leicester had just beaten Stade Francais in the opening match of the 2015 Champions Cup. As I commiserated with Thomas Savare, the SF President, our phones started to go crazy with the news of the Paris killings. A number of the EPCR team were trapped in their hotel and the whole of Paris was in lockdown. That terrible tragedy will never be forgotten and rugby played its part in paying tribute.

Imagine my disbelief when en route to Exeter Chiefs during this season’s opening weekend to be told that Anthony (Axel) Foley, the Munster Head Coach and former playing legend, had suddenly passed away in Paris before the Munster Racing 92 match.

The following week, Munster put on an emotional show of support for their coach and family, and then on the field versus the warriors of Glasgow. In a throwback to glory years, they swept their opponents away in a decisive performance and laid down a defiant marker. To show that this was not a one off they also squeezed past Ulster in the Pro 12 away from home, no mean feat. The Irish fires are burning and with Connacht top of their pool there are reasons for optimism.

Elsewhere, Europe stood back in respect but you could not help noticing Clermont’s near fifty point hammering of Bordeaux-Begles after their dismantling of Exeter. They mean business this year, as there aren’t many of the top teams showing consistent form so far this season, partly – and disappointingly – because of a lack of ambition and a little too much coaching. There are plenty of flair players around, let them express themselves! One team I applaud is Leicester who are really giving it a go, suffering at times for it but they deserve to succeed, and however long it takes it is the way to the top.

Saracens march on
I continue my theme that the Saracens have hit another level of performance, untouchable so far at home and in Europe. Despite a mounting injury list, they are destroying top teams with ease in the first 60 minutes and the biggest criticism is that they let sides play in the last 20! Nice problem to have. With an England hat on, Farrell has improved so much that he is now in my opinion the most complete no 10 in Europe and is surrounded by the core of the England team who also happen to be Saracens. He will stay as England no 12 for the moment due to lack of other candidates and because George Ford has the 10 jersey but I am loving his new found ambitious play and soon he will be there as the best. That’s some compliment.

Player Welfare watch
Worcester have an entire first team injured, and England have managed to accumulate at least a dozen injured frontline players. It’s already a tough season and it’s only October.